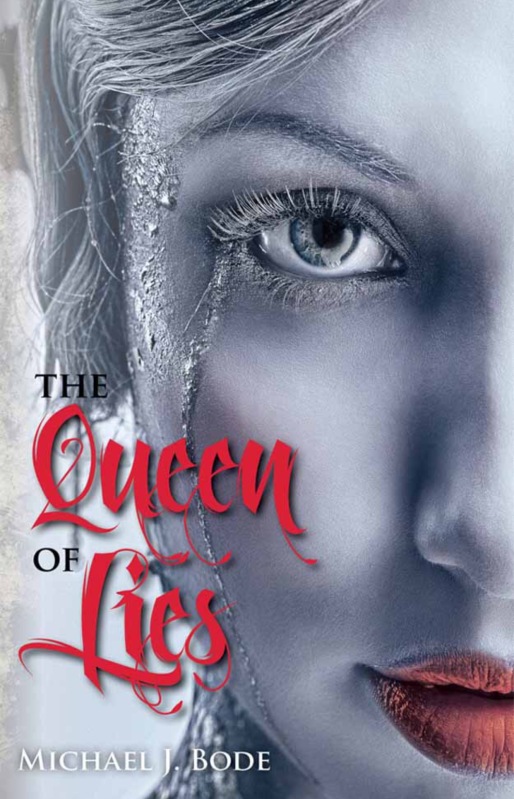 You all are in for a real treat. Mike Bode and I have been good friends going back well over a decade. Before either of us became published authors, we both had a loyal following on Livejournal. Bode was one of my favorite bloggers. My fellow ATL resident is armed with a rapier wit and a glass of the finest wine that would make one Olivia Pope proud. So when I learned that he stepped into the writing game with his debut novel, Queen of Lies, the first in the Architects of the Grand Design series, I was too excited to boost the signal.

Upkins: Michael, thank you so much for doing this interview. For the readers at home, tell us a bit about yourself.

Bode: I’m a single gay man living in Atlanta. I’ve always been an avid consumer of fantasy and science fiction from Dr. Who and Star Trek as a kid to shows like Continuum, Orphan Black and Game of Thrones. I threw off the shackles of corporate America to make my way in the wild, wild west of indie publishing.

Upkins:  You and I go back well over a decade when Livejournal was relevant. Even then, you were immensely prolific. Has writing always been embedded in your DNA?

Bode: I would say so. My first memory of writing is winning some sort of contest when I was in the second grade for a story called “Triscuit and Duke” about two dogs we owned. I don’t know what profound thing made it memorable to my teachers, but it probably showed a glimmer of promise.

In high school I wrote poetry, published zines (the prehistoric ancestor of the blog) and got some awards for short fiction—third place in state. That continued through college where I published short fiction in a variety of small literary journals (a fancier name for ‘zine).

I went into a period of remission where I wasn’t writing much fiction or even blogging but it came back to me with a vengeance. 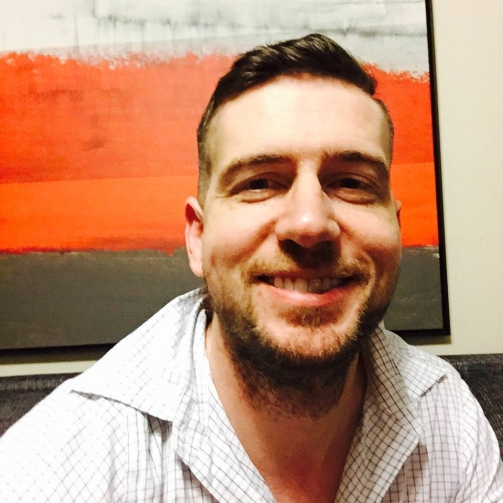 Upkins:  Did you always know you were going to write a book at some point?

Bode: Writing and publishing are two different things. I’d already written two novellas in college. Two and a half. What I didn’t always know is that I would write and publish a fantasy novel. I had more or less given up on the dream after college. The prospect of traditional publishing seemed daunting and I didn’t really know what kind of book I would write.

I sort of kept the thought in my mind as a nice hobby when I’m retired or something.

Upkins: So what motivated you to finally write the proverbial “Great American Novel?”

Bode: Wine and corporate vacation policy. The way it worked is you got so many weeks of vacation per year (our company was generous) but if you didn’t use all of it you lost it. I don’t take much time off so the end of the year is usually a week between Christmas and New Years where I’m sitting at home with nothing to do. One year I spent it binge watching Kitchen Nightmares.

In 2013 I decided to start a book, because it was something I remembered enjoying. Many more bottles of wine later I had the beginnings of a first draft and my vacation was hurrying toward an end.

Upkins: Who would you consider your storytelling mentors? Influences?

Bode: There are a lot. Foremost would be Richard K. Morgan and his book The Steel Remains. It had gay and lesbian characters who  were treated as noble but flawed heroes. Seeing a five page graphic depiction of gay sex in a Big Five book opened my eyes to the fact that there might be readers who want more stories like this. (His is much more risqué than my couple paragraphs).

Game of Thrones is also a big influence—my book follows different character arcs. The Wire is another influence along those lines of telling a story. I know it sounds strange but I like the idea of the city being a character in the book and exploring what it’s really like to live in these fantasy universes.

Upkins: Was this your first attempt at writing a novel?

Bode: I consider it my first true novel.

It was my first fantasy novel and first one over 50k words. The novellas I wrote in college would probably be more experimental/postmodern paranormal. I was trying very hard to be something I wasn’t with my writing which was why it always seemed so difficult.

I would daydream about these fantasy characters then go back to the blank page to come up with something “literary.” It never occurred to me that my imagination could be a source for writing material… as bizarre as that sounds.

Upkins: Did you have a gameplan or course of action for completing Queen of Lies?

Bode: No. When I put word to page I gave myself permission for it to totally suck and go on any tangent, literary convention be damned. It was a practice draft that I spent eight months on before completely scrapping. I needed it to get back into the swing of writing and to find my voice.

I started over and what developed later became The Queen of Lies. I didn’t have a gameplan or outline for that either but I trusted my voice. The characters took over and it came together beautifully.

Upkins: Tell us more about Queen of Lies? The world, the players, the stakes?

Bode: It’s a fantasy universe where magic is more prevalent than technology. But the setting of the story has a dysfunctional democracy coexisting beside a legacy of nobility. There used to be a lot  more magic, then a disaster hit but the world has pretty much recovered.

The book focuses on four main characters. There’s Maddox, a gay wizard with a drinking problem. There’s Heath, a fallen priest turned assassin/mercenary. His partner is a sentient sword that possesses the bodies of those who wield it. Then there’s Jessa, the daughter of a deposed tyrant, Satryn—a woman who is by turns, manipulative and insane.

The stakes for all of these characters are personal. They struggle with addiction, loss of faith, morality, abortion and family. There’s a big epic fight at the end too—but I keep the focus on the characters throughout.

Upkins: What do you think readers will find most distinctive about your voice/work?

Bode: It has a lot more humor than one finds in fantasy works. I also like to ask philosophical questions. Free will is a recurring motif.

Upkins: Diversity in media, specifically publishing, is a very relevant topic. As a white gay author, what are your thoughts on this?

Bode: We need more visibility. Period. Writing gay is easy because that’s my experience—I didn’t want to just stop there.

That was part of my challenge to myself in creating this world. I wanted to have a main character in a fantasy novel who was black, for instance. This is a made up world so I don’t buy that argument that “based on medieval Europe” there aren’t any PoCs in a fantasy setting.

Heath is black, and gay (or possibly bi). He’s a bit of an asshole at times, but so is everyone else in the book. And his race is not that big of a deal. I think a big mistake writers make when trying to write “diverse” is they reduce the character to that one thing. The gay character is tragic and persecuted and cries at some point. The black character is some noble savage warrior of impressive skill. Etc.

I wanted to avoid tropes.

I wanted there to be a little bit of something for everyone. Sword is an artifact but it changes genders in the book. It’s not a trans character per se but it is a fun way to explore gender and some people have said they identify with it. Great! There’s also straight sex. Who knew I could write it?

Toni Morrison said it best “If there’s a book that you want to read, but it hasn’t been written yet, then you must write it.”

Upkins: Having finished your first book, what have you learned from this experience? What’s been most surprising?

Bode: I had to write a bad book (80k words of it) to write a good one. My first draft had six main characters who all adventured together. It was a chore writing the dialogue and none of them really had room to develop. There were Mary Sues galore, dues ex machina… And I knew this stuff was bad. I still wrote it anyway because it’s easy to fall into that even if you do recognize those elements.

But I learned from my mistakes and when I started telling the story from scratch, I avoided making them again.

Another surprise is how few books it takes to make some of the top 10 lists in the Kindle store. I’ve had to get very good at decoding the numbers. I can look at a book’s sales rank and tell you how recently that book sold a copy.
13) Any tips or advice for aspiring writers?

There are a ton of tips and books to help you hone your craft out there. Read a few of them. Write some more. Then at some point stop reading writing tips. Definitely don’t read how to write DURING the process. Every tip is one author’s process and it’s no guarantee it will work for you. At best you might get an idea—at worst you’ll find yourself endlessly second guessing your choices.

There are some exceptions if you’re using reference books– there are books that talk about body language like the emotional thesaurus that I use.

Don’t write for publication if you’re still learning the basics. Practice and it will happen. You will start to trust your voice and stuff will come together organically. Don’t be afraid to start over.

For business advice I say Kboards Writers’ Café. There are professionals at all stages of their careers who are making a living who will answer questions and give free advice.
Upkins: Queen of Lies is the first in a series?

Bode: Yes. Volume 2, The Mirrored City, is due out in October. 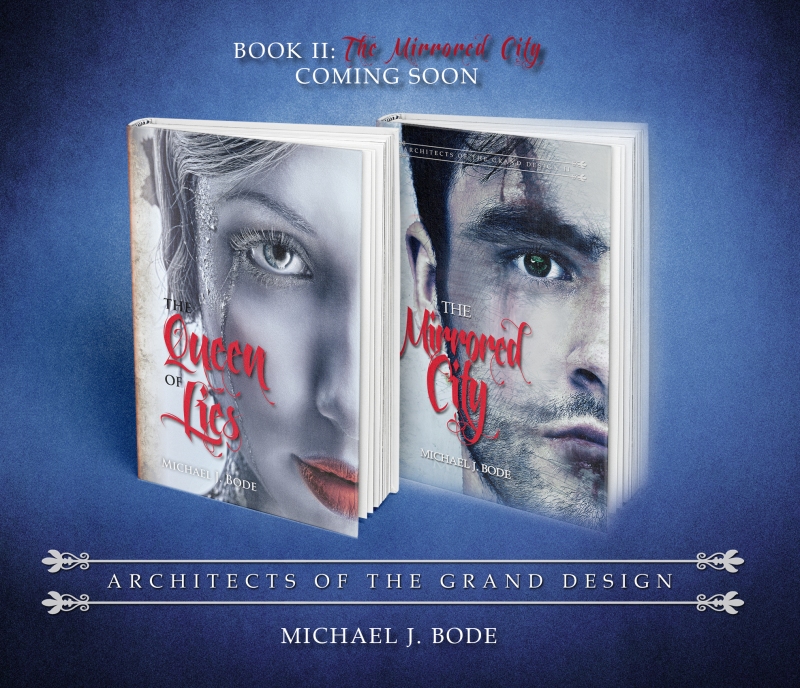 Upkins: What else lies ahead for Mr. Bode?

Upkins:  And where can we find you and your books?

Bode: The ebook is available on Amazon (free for Kindle Unlimited subscribers)

The paperback is available on B&N and Amazon Prime.