Anyone who’s known me for longer than 8 seconds knows that I praise and adore all things Gina Torres.

To some of you, she is a talented, brilliant and beautiful actress. To me, she is a deity whom I proudly worship. If you’ve seen season 4 of Angel, then you have an idea of my devotion to The Goddess.

Between Justice League Unlimited, Firefly, Serenity, Alias, Hercules, Xena, Suits, etc. her catalog of work is much like the goddess, flawless.

However, there is one film of her’s that I have yet to watch and have no plans on doing so.

I refuse to see Chris Rock’s I Think I Love My Wife where in the movie Perfection Herself is married to Rock who is questioning their marriage.

I just couldn’t suspend my disbelief and this is from a guy who makes a living writing speculative fiction.

Chris Rock having doubts about his marriage to Gina Torres?  First of all Negro, who in the Blue Hell is you? Who are you to doubt anything pertaining to Perfection herself?

I mean don’t get it twisted. Your surname may be Rock but you sure as hell ain’t the Rock. You might be a few slots above Flavor Flav if I’m being generous.

I say this as a gay man. If you are married to the Goddess of Flawless Victory, and you still aren’t happy with life, I don’t know what to tell you. Something is obviously lacking and deficient on your end. I’m saddened to tell you but clearly your life had just been a waste. 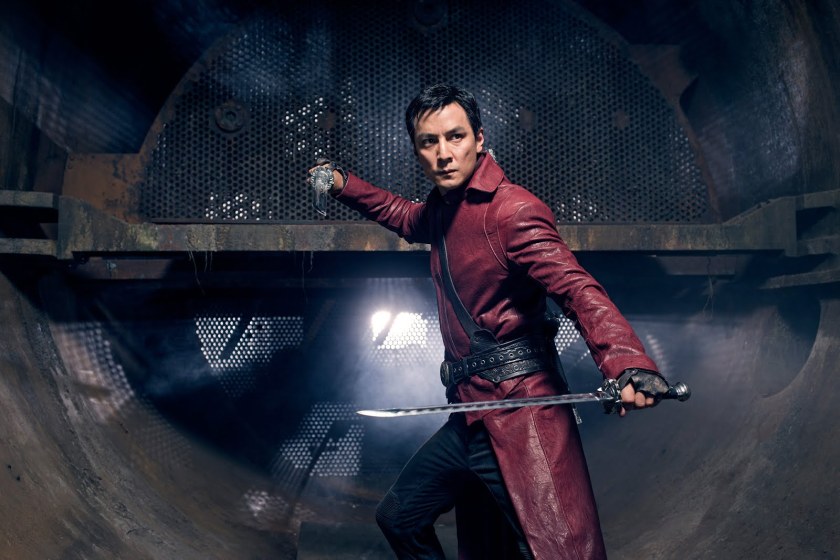 One of my favorite television series on the air right now is Into The Badlands.

The noirish dystopian Wuxia drama is the perfect blend of action, mystery and mysticism that keeps my eyes glued to the flatscreen.

As is the case with all things PoC excellence, Into The Badlands has caught its share of hate from racist white fandom.  I’m not talking about legit criticisms but nitpicking and feeble excuses that are never made for legions of lesser white shows.

Needless to say I’m not having it.

When the shade is thrown, I’m honor bound to make the haters day a “Sunny” one.

END_OF_DOCUMENT_TOKEN_TO_BE_REPLACED

So after writing the piece, Why The Black Panther Is Marvel’s Answer To Batman, a racist troll decided to iceskate uphill on social media:

Racist White Fanboy: No Denny your article is wrong. Moon Knight is Marvel’s answer to Batman, not Black Panther.

Denny: We’ll have to agree to disagree.

Denny: And I guess you’re only claiming Moon Knight because you both wear white hoods?

You slay me with your shenanigans.

So if you follow me on social media, you know that I tend to be very “imaginative” when it comes to voicing my opinions about my fandoms. For instance I have nicknames for many of the shows I watch. Some of them are terms of endearment, some of them are hints of the headcanon at play in the enigmatic inception that is my brain, some of the nicknames….well…….you’ll get the idea.

Let’s play shall we.

END_OF_DOCUMENT_TOKEN_TO_BE_REPLACED

Several friends have pointed out to me that whenever they see my Twitter handle, drupkins, they sound it out in their heads as Dr. Upkins. A number of them have mentioned that part of the reason is that they can so see me as a doctor, based on my personality and cerebral nature. No matter how many times I hear this, I’m always deeply flattered. The truth is my Twitter handle is simply comprised of the initials of my first and middle name and my full last name. That being said, I’d be lying if I said that I didn’t think Dr. Upkins didn’t have a nice ring to it.

This got me thinking about another doctor or rather, The Doktah.

END_OF_DOCUMENT_TOKEN_TO_BE_REPLACED

And in honor of football season (and bookmark this because this is one of the rare times you’ll see me honor sports, lol), I thought I’d post this gem here. Talk about a tight-end, damn.

So there’s something you should know about me.

You probably already figured it out but I think it’s time I’m open and honest.

In case there was any doubt, I am in fact….well, you know what they say about pictures being worth a thousand words:

Sick of the holiday season? The rampant consumerism? Society’s greed? And everyone acting rude and obnoxious jerks and embodying everything that goes opposite of what this holiday season is supposed to be about?

Well we have a movement for you. It’s called Occupy North Pole. We’re taking on the one percent that gets ignored: Santa Claus.pitiful wages to the poor tiny elves, his rampant discrimination of minorities: reindeers and misfit toys alike. We say that Mr. Claus has gone too far.

My girls Sisterspooky and Jesterwitch are joining me in this as well as Scrooge, the Grinch, Rudolph, the Misfits. We’re also briniging in the big guns: Jack Bauer.

But wait! There’s more. My man Skeletor is getting in on the action and he’s about ready to turn this Yule out.

When a milestone birthday triggers a midlife crisis but a speech from @fearlessmotivationofficial gets your whole life right together. ___________________ Success can be a lonely road.  It can be a tough road. It can be a hard road. It’s certainly not for everyone… Those who follow others like sheep will never know who they truly are. Only those who follow their own path can discover the truth of their own potential. Those who fly alone have the strongest wings.  Those who walk alone have the strongest direction.  The rest will always be IN NEED of others for their survival. They will always need attention. Need recognition. To survive. I am at peace alone. Needing no attention. No recognition. And still I thrive. I am not saying those who have support are weak. I am not saying you must go it alone to gain strength. This is just for those that have fought battles alone, those who have felt like they don’t fit it, those who have never had support, in anything they do. All of those who feel no one believes in them… You don’t need them to believe in you if YOU believe in you. You don’t need their support if you’ve got your own back. The best part is, when you truly live the life you want to live…  When you speak your truth… When you embrace who you are… Then you gain real respect, and real love. People love those who have the GUTS to be themselves. Those who have the courage to follow their heart.  Why? It’s RARE.  Why? Because most people wish they could do the same. Show them the way. KEEP GOING.  BELIEVE IN YOURSELF.  It will all come good in the end, and when it does, you won’t have only inspired yourself to be more, you will have inspired so many others.  I had to learn to fight alone  and because of that I am strong alone . I am strong. Full stop. I developed inner strength  that can’t be broken.  I am unbreakable. Because of the pain,  I am strong. Because of the struggle  I have character most will never know.  I appreciate others more than ever.  I have more compassion than ever. I had to go deep into the darkness…  Now I have more depth . Now I can see clearer.  I had to face huge internal challenges … Now I can face any challenge.
2 Scores Later.... All things considered, not bad at all. Here's to you #BirthdayBoy Battle on Herald! #ganymede #aquarius #weloveus #blackboyjoy #herald #seraph #auteur #catholicpagan #lgbtq
“To be yourself in a world that is constantly trying to make you something else is the greatest accomplishment.” -Ralph Waldo Emerson #andiquote #wisdom #spirituality #catholicpagan #levelup #malemodel #writersofinstagram #melaninmagic #weloveus #aquarius #istj #lgbtq #lgbt